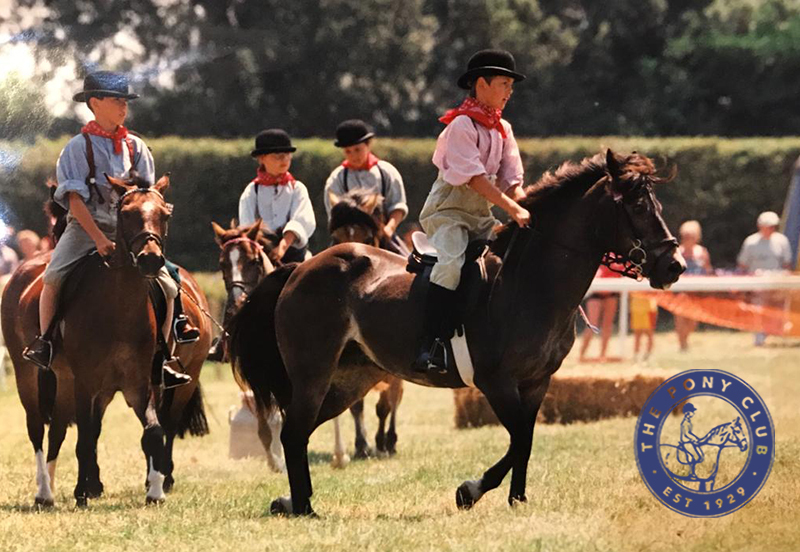 Founded in England in 1929, the Pony Club now boasts over 110,000 young members in 27 countries across the world. The equestrian club has been a formative experience for riders of all types, and most look back fondly at the time they spent learning the principles of horsemanship, competing in various disciplines, and making friends for life. With so many members there is a place at the Pony Club for all, but certain types of ponies do crop up time and time again.

Callie might look a bit tired; she’s recently returned from competing at the Pony Club Championships, where she and her rider Bertie represented the Area at showjumping, dressage, eventing, AND tetrathlon.

Despite her relatively short stature, Callie has the conformation of a scaled down horse, and uses this to her advantage for competing. Her athletic Connemara build makes her agile and a brilliant jumper, but she also has a pony instinct and fifth leg which gets her out of sticky situations. Bertie doesn’t quite appreciate how many of his rosettes are a result of his pony’s perfect temperament rather than simply his skill.
There’s not much this beautiful grey Connemara pony can’t do, and bets are on whether it will be Bertie’s ever- growing legs or his recent interest in girls that will see her listed under ponies for sale on Whickr.

Bertie’s mother will be devastated, as she enjoys exercising Callie during the week, but his father is surreptitiously converting her sale price into golfing holidays.

Seamus is the bane of the Pony Club. Despite his daisy rein and the frustrated attempts of his handler, he spends 80% of any rally with his head on the ground – even when winter weather sends the branch to the local indoor school, he can still be found burying his muzzle in the sand.

Seamus’s main love in life is eating, but he is also pretty adept at gymkhana. Jumping he would prefer to complete solo, after dropping his shoulder and depositing his rider on the ground before the first fence.

Shetlands of years gone by undoubtedly arrived at rallies in the backs of Land Rovers or parked in front of the breast bar of a horsebox. Seamus’s owners have spent hours scrolling forums for the safest legal way to do it but find that whatever they try he always manages to untie himself and get into trouble.

3. Willow the Welsh Section A

Willow the Welsh Section A has been a stalwart of the Pony Club for as long as anyone can remember; as venerable as the ancient District Commissioner. Generations of children have learnt to ride on her dappled back, and she counts amongst her previous riders a Badminton entry (retired cross country), a ladies’ champion point-to-point jockey, a professional huntsman, and a stunt rider from Game of Thrones.

Children are put on a list at birth for a chance to loan Willow, and there are all sorts of promises made to try to get to the top of the list; her owner is never without a hamper at Christmas, tickets to Cheltenham, and a winning number at the annual Pony Club prize draw.

Despite being just 12hh, this Welsh Section A turns her hoof to all Pony Club activities. Forward going and confident but never silly, she is sometimes taken off the lorry and brought into the senior group to give nervous ex-racehorses and warmblood horses leads into the water jump on the cross- country course.

Nora goes everywhere at top speed, making sure that nobody forgets her thoroughbred blood. Her favourite part of any rally is when the instructor gives permission for a race around the perimeter of the field, an activity which she almost always wins.

Like many New Forest ponies, jumping is her forte, and she doesn’t think much of dressage, which is why her team appearances are usually restricted to tetrathlon, where she gets all the fun of galloping over solid fences without the need for 20m circles.

Fred is at the rally under duress; his life revolves around showing with his owner Kate, but a sudden lameness has put Kate’s daughter’s pony out of action, and so he has been prised away from his stable and off to a field full of shrieking teenagers.

Once involved in Pony Club activities Fred starts to enjoy himself; but his ears flick back and forth as the riders work out whether he is a Fell or a Dales pony. Indignant that none of them have learnt to spot the subtle differences in conformation between the two breeds, he erupts into an extravagant medium trot which commits him to a summer of Pony Club dressage.

To learn more about native breeds check out our profiles of Welsh Ponies and Cobs, Connemaras, and the Suffolk Punch.