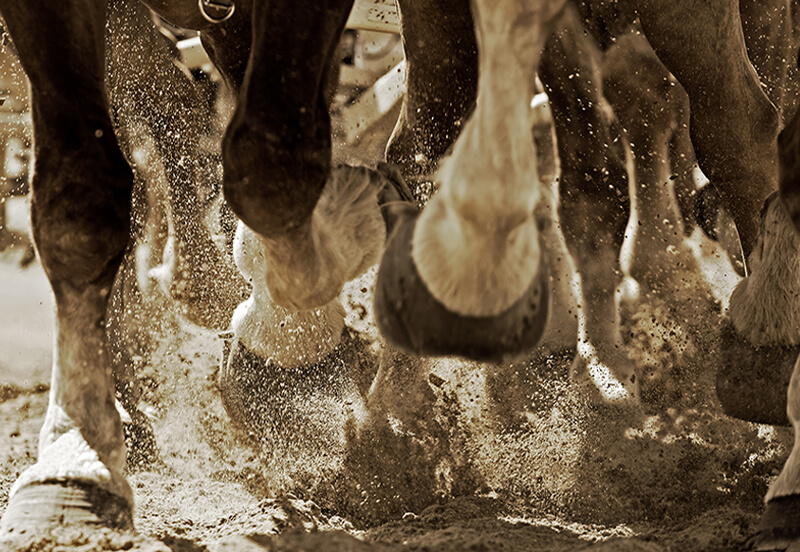 The classification of horses as hot, warm, and cold bloods can be confusing. As mammals all horses are warm-blooded – they don’t need to lie around in the sun to summon energy for the day, although some do like to! The categorisation is crude, but essentially groups horses according to general temperament and conformation.

What is a coldblood horse?

Coldblood horses are the heavy horses, often referred to as “gentle giants” because of their stature and placid temperaments.

They tend to be placid and kind, with easy-going temperaments that make them suitable for riders of all abilities. They tend to have slower reaction times compared to warmbloods and hotbloods, and can take longer to train, but coldbloods are not unintelligent. Some can have a stubborn streak!

Although different breeds will have their own individual histories, most coldblood horses descend from ancient European breeds used for heavy work such as farming, hauling, and war. Their large bodies and colossal strength allowed them to pull ploughs and agricultural implements, work for breweries, and carry knights in heavy armour into battle.

Conformationally coldblood horses reflect their original use of pulling and carrying heavy loads. They have large legs and shoulders, kind eyes, and some breeds have a slight Roman profile to their heads. Their feet are often large and they can have an abundance of feather. Thicker coats enable them to withstand harsh climates and be easy to manage in cold conditions.

Breed wise coldblood horses encompass the draught breeds–such as Shires, Percherons, Ardennes, and Suffolk Punches. Sometimes the description is broadened to include heavy cobs and riding types such as Icelandic ponies and Friesian horses. Some fans of the latter will say that Friesians belong to a separate category of “baroque” horses.

What are coldblood horses used for today?

Today coldblood horses have a range of uses. Some are still used for farming and forestry (especially on steep slopes where machinery use is limited), or for pulling brewery dreys, although much of this is now for display purposes. Breeds such as the Shire have showing classes which draw enthusiasts to admire their traditional turnout.

Due to their kind temperaments coldblood horses make excellent leisure horses, suitable for all members of the family (although shorter ones will certainly need a mounting block). They are great for hacking, and individual horses compete in dressage, hunt, and jump. With the right training and attitude coldbloods can far exceed our often, limited expectations of their abilities.

What is a warmblood horse?

The phrase “warmblood” usually refers to the continental sports horses, which often carry the word in their names. However, the classification actually encompasses the majority of middleweight horses, as they have originated through crossing hot and coldblood horses.

Historically warmbloods were used as cavalry horses, for farming, and in harness. Lighter in build than coldbloods, they were bred to be suitable for a wider range of jobs, making them true all-rounders. As their traditional roles were phased out by mechanisation, warmbloods were adapted for sport and leisure.

They are typically calmer in temperament than hotbloods, but sharper than coldbloods, and have an athletic conformation. They retain some of the speed, endurance, and agility of the hotbloods, but the introduction of the coldblood gives them added robustness and a quieter temperament.

On the continent warmblood breeds have often been characterised by state involvement, through the ownership of studs, and the administration of breed societies with strict performance requirements. The focus on performance rather than pedigree means that warmblood societies will often accept horses without a recorded pedigree, or with ancestors in a different studbook.

Popular warmblood breeds include the Hanoverian, Irish Sport Horse, Dutch warmblood (KWPN), Oldenburg, and Trakhener. Outside of Europe many of the popular American breeds are also warmbloods–the Quarter Horse and Tennessee Walking Horse are both so due to their mix of cold and hotblood parentage.

What disciplines do warmblood horses excel in?

The majority of sports horses can be classified as warmbloods, which means that they have a vast range of uses from companion horses to the upper echelons of Olympic disciplines. Traditionally they have excelled in dressage, showjumping, and carriage driving, although the reduction of the length of eventing’s cross country phase means that they are increasingly winning at its highest levels.

In the hunting field the “first cross” of Irish Draught and Thoroughbred, known as the Irish Sport Horse or Irish Hunter, tend to be more popular than continental warmbloods, as they are usually regarded to be cleverer and better suited for staying the day.

What is a hotblood horse?

“Hotblood” refers to a selection of fine-coated, light bodied horses, who’s main attributes are usually thought of as speed and stamina. They are typically sharp–witted, intelligent horses, who are quick to learn and very adaptable.

Hotblood horses originate in the Middle East and North Africa, where they were held in high regard by nomadic tribesmen. The close relationship between man and horse is claimed to be one of the reasons why these breeds are considered to be the most intelligent.

Physically, hotblood breeds are all influenced by Arab ancestors, which is reflected in their pretty heads and sometimes “hot” temperaments (the supposed root of the phrase “hotblood”- the other relating to the climate of their original homes.

Over time hotblood horses were traded with Western countries, or taken as captives. Restrictions on who could buy pure bred Arabs means that some of the first stallions in the UK were smuggled out of Aleppo, Syria, while the thoroughbred foundation sire the Byerley Turk is believed to have been captured at the Siege of Buda in 1686.

Crossing Arab, Barb, and Turk horses with British native breeds brought about the thoroughbred, which was primarily used for racing but also excels across all disciplines. Hotbloods have been crossed with coldbloods and ponies to add speed and stamina, producing the modern day warmblood.

Hotbloods may be the smallest group of horses, as the category refers to Arabs, Barbs, thoroughbreds, and Akhal- tekes. Arabs, thoroughbreds, and their crosses (Anglo-Arabs) are probably the best known. Akhal-tekes, the modern relatives of the Turkoman horses, have a distinctive glimmering coat and are very beautiful.

What disciplines do hotblood horses excel in?

Thoroughbreds and Arabs have long been associated with racing; both short distance galloping races and endurance competitions of up to 100 miles in a day. These speed and stamina traits cross over well into other disciplines, thoroughbreds excel at eventing and are regarded as excellent hunters.

Due to their adaptability and intelligence hotblood horses take part in all equine disciplines, from horseball and polo to dressage and display teams. These traits have led to the huge success of organisations like Retraining of Racehorses, and a demand for both Arab and thoroughbred ex-racehorses.

Horses can be split into cold, warm, and hotbloods, based on their breed and type. Coldbloods are generally heavier and hairier, the legacy of being bred in cold climates and used for hard, weight-bearing work.

Hotbloods originate in the hot deserts of Arabia and the Middle East, meaning that they are light in hair and bone, and quick-witted from living very close to their owners. Being held in such reverence may also account for the arrogance displayed by some of these animals.

Warmbloods are somewhere in between; middleweight sports horses with varying degrees of cold and hotblood influence. They typically excel in the disciplines of dressage and showjumping, but have long and sometimes difficult histories which take in roles as cavalry horses and agricultural workers. Most of these breeds are characterised by the ability to adapt and change to the needs of their time.

Which is your favourite? Would you swap your Shire for a Barb?