How have horses evolved? 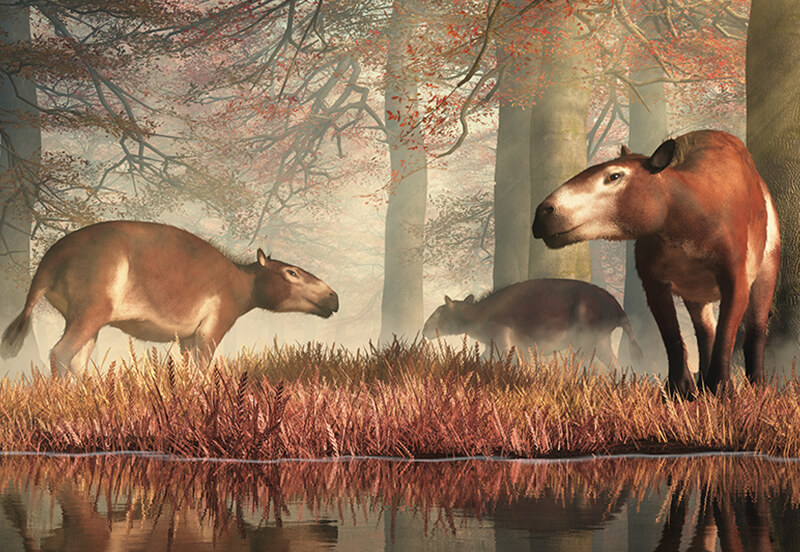 The evolution of the horse is a fascinating subject, covering over 50 million years of geographical and biological changes, and an important consideration when managing the needs of our modern animal. While such an expanse of time will always leave puzzles for scientists, the horse’s history is comparatively well studied, which makes it easy for horse owners to learn more about the origins of our longtime companions.

What were ancient horses called?

The early equids (the group which includes horses, their living relatives, and all their extinct ancestors) weren’t horses as we know them today – they were their own unique animals, and some of them were alive on earth for longer than the current existence of our modern horses. Through this article we’ll refer to them as “horses” or “equids”, but each twig on the evolutionary tree has its own name.

We’ll refer to some of these through the article, some of the major animals in order of existence;

Eohippus was very different to our modern horse – so much so that at first it wasn’t believed to be related at all. Between 4.2hh and 5hh, it was the size of a fox, and had an arched back and raised hindquarters. Its teeth were adapted for a browsing diet- eating leaves, fruit, and shoots of shrubby plants. Notably they had padded feet with multiple toe-like hooves; four on each forelimb and three on each hind.

The teeth were the first significant change for the horse.

Orohippus and Epihippus had more molarlike teeth, with a system of ridges along their length. This helped them with eating a variety of foodstuffs.

An environmental change from forests to grassy plains meant that horses needed to adapt to a grazing diet, and have teeth to match. Parahippus was the first horse to have this adaptation. It had cheek teeth which were adapted for grinding with a side to side action, and long crowns embedded in the gumline. As the teeth were worn down by eating grass they grew out, a process which still occurs in modern horses. Scientists have found evidence on fossilised teeth- tiny scratches- which indicate that some of these long-toothed animals continued to eat leaves alongside grass.

Equus has straighter and longer teeth than Parahippus. Its teeth are covered in a substance called cementum, which makes them harder and better suited for eating abrasive and fibrous grass.

One of the other major changes is in the shape of the head.

The earliest horses had short heads, with snout-like noses. The lengthening of the nose is linked to the change in the teeth- the horses needed more space for its new dentition- and corresponds with these horses starting to look more like our idea of a horse. The change was gradual, but by Merychippus the skull was very similar to today’s horses.

Of all the changes in appearance which have occurred over the millions of years of equine evolution, it is the loss of toes and development of a single hoof which is perhaps best known and most interesting.

Changing from toes to hooves

Eohippus had four toes on each forelimb and three on each hind. The change from forest life to grassland meant that horses needed to run away from predators (rather than hide as they might have done amongst the trees) and so having fewer toes was advantageous.

The first losses of functional toes and changes in leg anatomy happened fairly early. Mesohippus used three toes on each leg, with the fourth toe of the forelimbs present but not functional.

The bones of the leg had fused in Parahippus, and while the extra toes were still present, it bore most of its weight on a central toe. The changes in the “side” toes is where Parahippus gets its name- “Para” is Greek for “side”.

By Merychippus the foot pad had disappeared and the side toes were very small. The central toe was attached to the lower leg with strong ligaments, which formed a spring mechanism which pushed the hoof forward after the impact of hitting the ground.

The old toes might not be obvious today, but they have been incorporated into the horse’s anatomy. The short splint bones are remnants of the prehistoric side toes, and recent research suggests that the frog is also a vestigial toe.

Merychippus had several three toed descendants, but crucially for the development of the modern horse one inherited the one-toed feature. This led to Equus, the group which includes all modern day equids. Equus shows further adaptation in the spring mechanism, which gives it the characteristics of speed which we associate with galloping horses.

While Eohippus was very small, Mesohippus reached a height of 6hh. The grazing horses were larger again, with Merychippus, at 10hh, not considerably smaller than some ponies. Over such a vast expanse of time there was some back and forth on growth, with species becoming smaller and then larger again. The general trend however was for a taller and heavier animal.

Where did ancient horses live?

The very first horses lived in a world that was quite different to today- North America, Europe, and Greenland were joined together in a continent called Laurasia. Eohippus lived on this continent, although most equine evolution happened in what is now North America, and that has been the best place for fossils.

The early environment of these horses was warmer and wetter than today, with tropical conditions across much of the world. Over time the forests gave way to open grassland, but for tens of millions of years horses lived amongst the trees.

Equus – the group that includes modern horses- migrated from North America across Eurasia, as there was once a land bridge across the Bering Sea. Horses became extinct in the Americas between 13,000 and 11,000 years ago, and as the land bridge had disappeared they had no way back. They would return to America- but not until they were brought there by the Spanish in the early 1500s.

That is one of the reasons why wild equids have been found across Asia, Europe, and Africa, but not in the other continents. Mustangs in North America and brumbies in Australia are feral populations of domesticated horses, not indigenous wild animals.

When did modern horses first evolve?

Equus- the genus which includes modern horses- first evolved somewhere between 4 and 4.5 million years ago. Taking into account the span of time that stretches from Eohippus to the 21st century, the modern horse is a fairly youthful member of this evolutionary tree.

Most of equine evolution happened in North America, but domestication happened in Europe and Asia after horses crossed the Bering land bridge and later became extinct in the Americas.

Equus caballus became widespread across central Asia and Europe, with three populations believed to be the ancestral origins of our domestic horses. The first is well-known to most riders; Przewalski’s horse, a sub species which some regard as the only remaining truly wild horse. There is a lot of debate around the Przewalski’s horse, as some scientists believe it is truly a separate species, and some state that there is evidence that it is descended from domesticated horses.

The other two populations are less known, although some readers will have heard of the tarpan, which is thought to have lived into the 20th century in parts of the then Russian Empire. The other group is the forest horse of northern Europe, which may have given rise to the heavy, coldblooded horse breeds of that region.

Domestication of the horse

Domestication is likely to have first occurred around 6,000 years ago, in an area above the Black Sea from Ukraine to Kazakhstan. However, it might have happened independently in different locations, with suggestions that it also took place in what is today Spain and Portugal. This region was one of the only places to remain habitable during the Ice Age, which made it an important haven for horses.

The earliest domestication events would have been for food, which means that humans have occupied the role of predator in the human- horse relationship for far longer than we have been their riders.

Genetic analysis suggests that as domestication spread, humans incorporated wild horses into their breeding strategy, introducing new material into the gene pool. Human selection for desirable traits has given us the huge variety of horses we see today, from tiny miniature horses scarcely bigger than the early equids, to the heavy horses so important to agriculture and industry.

How are zebras and donkeys related to modern horses?

These animals are all closely related- close enough to be able to interbreed- but not close enough to produce fertile offspring. That is why mules and zorses are sterile. They have many similarities in appearance and behaviour, because of their common ancestry.

What can we learn from the evolution of the horse?

While our domesticated horses are different from their wild ancestors – and very different to the earlier equids – their evolutionary adaptations do have consequences for the ways in which we manage them.

The researcher Goodwin (2002) writes that wild populations of horses live in reasonably stable groups, and spend up to 16 hours a day eating. They can cover very large areas in their pursuit of food, and diet will be dictated by seasonality, with different plants available in the summer and winter.

Millions of years ago the teeth of the horse adapted for grinding grass, and continually grow in order to compensate for the wearing down of this tough foodsource. Modern horse ownership can often demand that horses are housed for long periods, kept on their own or in frequently changing groups, and provided with concentrate feed and small amounts of forage.

When owners think about the life that horses spent 50 million years evolving to lead, and compare that with the conditions that we keep them in, it is unsurprising that horses can experience behavioural and physical problems.

Horses are one of nature’s great success stories, and scientists like Goodwin emphasise that over the aeons of time they have been around, they have been prolific. For each of the horses named above there would have been species and sub-species, some which disappeared without any modern legacy, and others which contributed to the horses, zebras, and donkeys which are alive today.

To succeed as a species animals need to be adaptable, reacting to changes in climate and environment, and finding a niche which keeps them alive. Horses have done this, and have developed social structures and physical characteristics which mean that feral populations live today in a range of habitats.

While owning horses it is important that we take into consideration their evolutionary needs, and where possible replicate their natural conditions. This isn’t always easy, but measures like offering ad-lib hay, or longer access to turnout, can have multiple benefits to modern horses.