The passionate history of riding side saddle unveiled 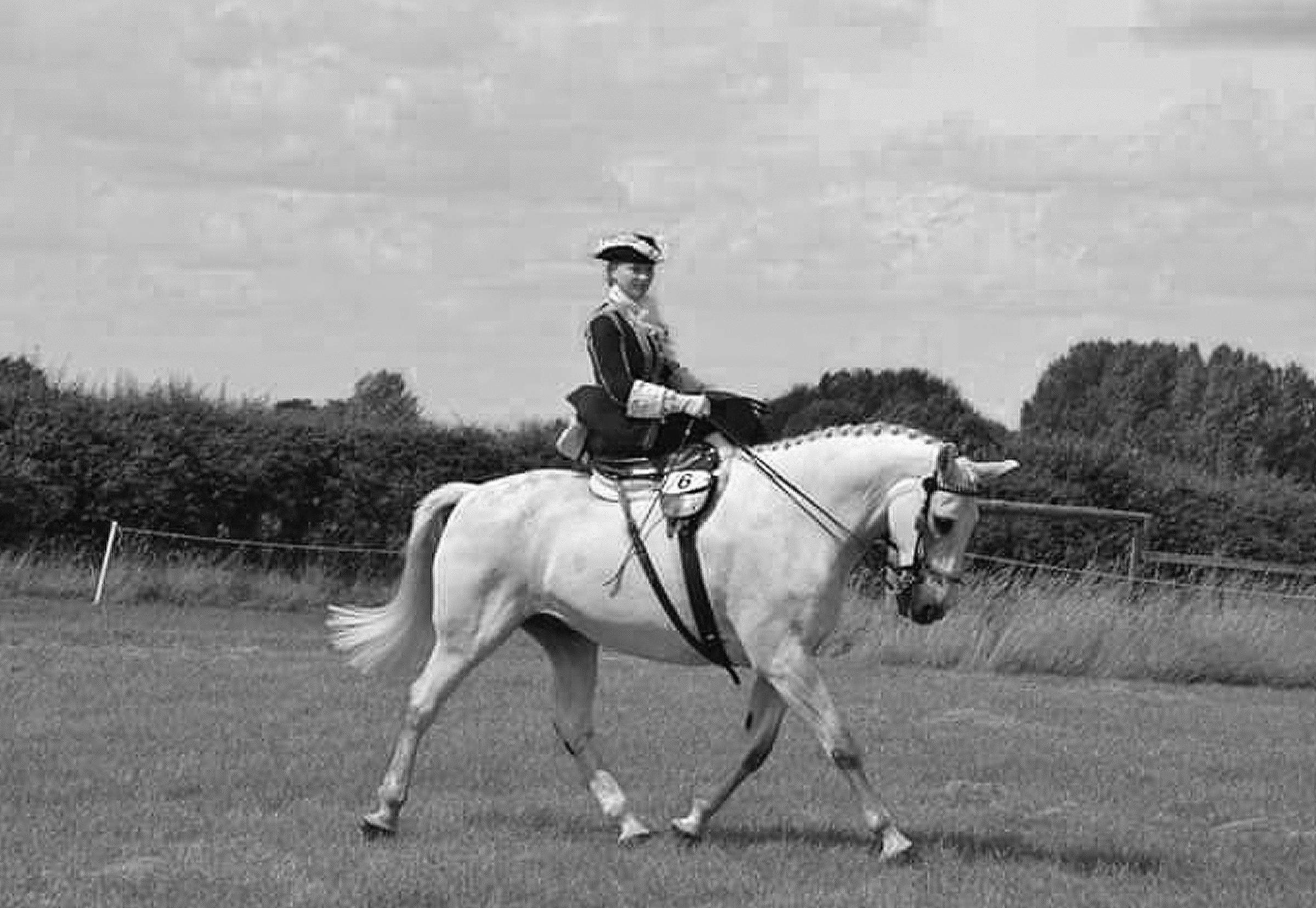 My fascination with riding aside started with the old saddle that hung at the top of the stairs. Belonging to some long-forgotten ancestor of my father’s, she sat on the bannister, her embossed leather and delicate black slipper a reminder of an elegant past defined by chivalry and grace.

I wondered if I ever buy a horse to ride aside how it would feel to balance on the narrow seat, and to arrange my limbs amidst her three pommels. Downstairs, a plainer and older saddle held coats by the Aga.

Today, when I visit my grandparents in their kitchen a photograph showed my maternal great grandmother aside a horse, using the saddle to ride into town. That saddle had just two upright pommels, marking it as an artefact of the first evolution of riding side saddle.

In my opinion we are amidst the fourth wave of riding aside, and today I’m going to give an insight into how we got here.

The first side saddles

Side saddles as we imagine them are a fairly modern construct. In ancient times women rode as passengers behind men, or indeed rode astride.

The Amazons of Greek mythology, and the Celtic pony goddess Epona are depicted as riding with a leg on either side of their horses, and there are accounts of Chinese women playing polo, and of Charlemagne’s daughters hunting astride.

The first images of women riding side saddle show ladies sitting sideways on a horse, with both feet resting on a planchette. This would have given very little control, and it is likely that the horse would have been led by another rider.

In 1382 Princess Anne of Bohemia rode across Europe to marry King Richard II, in a saddle rather like a chair, with her feet resting on a footstool. This was an attempt to preserve her “virginity”, an idea that would be associated with riding side saddle for centuries.

Until the 16thcentury this style endured- at least for some women- until Catherine de Medici devised a saddle with a single pommel over which to hook her right leg.

Given the emphasis on preserving virginity, it is interesting to note that a selling point of this design was its ability to show off Catherine’s calf and ankle. More importantly for modern side saddle aficionados, this saddle offered enough security for women to trot and canter, and to control their own mounts.

The development of the side saddle

Further adjustments brought the side saddle closer to those that we see today, and up to the level of the old side saddle in my kitchen. A second pommel was added to the right-hand side of the right leg.

These saddles have a shape to the seat that encourages the rider to lean back, which is exacerbated by the lack of support for the left leg. It is difficult to ride at a fast pace or jump, and it is unsurprising to read that women of the era- such as Catherine the Great- refused to ride side saddle.

The standard design of the side saddles that we use today came about in the 1830s, when the leaping head was introduced. Fitting over the left thigh, this extra pommel provides the support necessary to jump and gallop aside.

The second pommel was later removed, leaving saddles with the familiar two- pommeled pattern. Women could now conform to the required social norms, and yet ride as equals to men, whether that be in travelling, parading a new horse down Rotten Row, or hunting.

Men and side saddle

While side saddle is always considered a woman’s sport, men would have ridden aside. Ladies’ horses would have been taught to carry a side saddle by a male groom, and any man teaching a woman riding lessons would have had to have an idea of how to ride side saddle themselves.

Disabled men who could not use a normal saddle were also sometimes found to ride aside. During the Second World War soldiers rode side saddle to lay cables; having both legs on one side meant that they could do so at a gallop without becoming entangled.

In the 21stcentury there are several notable male riders who compete and hunt aside, although they do not wear riding habits!

The demise of side saddle

Riding astride started to become socially acceptable in the early 20thcentury. This is depicted nicely in everyone’s favourite period drama, Downton Abbey.

Throughout the different series Lady Mary Crawley progresses from riding aside as a default, to remarking that her grandmother wouldn’t allow her to ride astride, to the final hunting scene where she rides in a normal saddle to the amusement of her father.

The women’s suffrage movement saw riding side saddle as a sign of oppression, and several suffragettes made a point of riding astride, such as the American activist Inez Milholland, who led 8,000 people in a Washington protest, riding astride in a flowing white cape.

They may have had a point; the first safety aprons, designed to open if caught on the pommels of a saddle, were not designed until 1875, and before that any women falling off would have been in danger of being dragged by her skirts.

That was of course if she had not been dragged by her stirrup- another risk that was not alleviated until the introduction of the release mechanism of the safety stirrup.

By the 1930s it was acceptable to ride astride, and side saddles were quietly transferred to antiques and barns, there to gather dust until the renaissance in riding aside made them suddenly valuable.

The long years of saddles designed for riding astride dominance, and the associated lack of demand for saddlers to make side saddles, is the main reason why the majority of side saddles in use today are a century old.

While side saddle didn’t completely die away, there has definitely been a resurgence in the last decade. Those old saddles have been dusted down and refurbished, and saddlers have picked up on the demand for alterations and for new saddles.

The Side Saddle Association is booming, with showing classes up and down the country filled with riders and horses of all shapes and sizes.

Traditional disciplines such as hunting and showing are of course the bastion of modern day side saddle riders, but riders also sit aside in display teams, and compete in all equestrian sports bar jousting.

Side saddle races are an increasingly popular spectacle at point to points, and shows host side saddle high jump competitions alongside equitation classes. Crowds flock to the infamous Dianas of the Chase race, to see the world’s bravest and best gallop aside over natural obstacles.

The suffragettes might turn in their graves at the resurrection of a symbol of oppression, but in 2019 riding side saddle can be an exciting challenge for the experienced horseperson.

Sitting aside, they will feel the same muscles pull after a long day’s riding as did their foremothers centuries before.