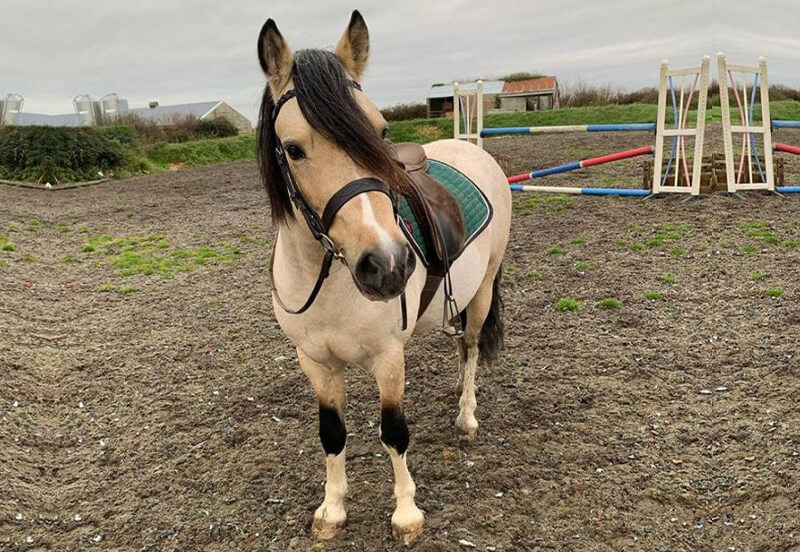 Part cob, part pony, and extremely versatile and practical, the Welsh Section C is the least common of the four Welsh breeds. This is no reflection on its capabilities or temperament, and the Welsh Section C should be an early point of call for anyone looking to buy an all-round family pony.

What is a Welsh Section C?

The Welsh Section C is the “Welsh pony of cob type”, standing up to 13.2hh, and bearing what some regard as the best attributes of both types of horse. The Welsh Pony and Cob Society describe them as a true dual–purpose breed, which are natural jumpers as well as excelling in harness.

Like the other members of the Welsh Pony and Cob family, the Welsh Section C can be found in all solid colours, but grey Cs are less common than grey Section As and Section Bs.

History of the Welsh Section C

A pony of cob type has existed in Wales since the Middle Ages, but the modern Welsh Section C is believed to originate from the crossing of Welsh Section As and Welsh Sections Ds, a mix which can be clearly seen in the Section C’s physical attributes.

Historically the Welsh Section C was used as a farm horse, and also for labour such as hauling slate from the quarries to the ports. During this time the breed was influenced by breeding with Iberian horses, the Norfolk Trotter, the Hackney, and the Yorkshire Coach Horse.

Mechanisation of agriculture and of industry reduced the demand for the Welsh Section C, and so by 1949 the breed was in danger of extinction, with just one stallion and his two sons remaining. At this point the Welsh Pony and Cob Society stepped in to rescue the breed by establishing a separate Section for ponies of cob type. The Welsh Section C is therefore the youngest of the four Welsh Sections.

In recent years the Welsh Section C has increased in popularity, which has led to a growth in numbers. By 2018 the breed had reached a stage where the stallion Tyrllawn Rolls-Royce sold at auction for £45,000.

What disciplines do Welsh Section Cs take part in?

The Welsh Section C is a true all-rounder, used for riding and driving, and capable of carrying both children and an average sized adult. In the show ring they compete in breed and Mountain and Moorland classes, and in the latter have a natural aptitude for Working Hunter Pony competitions.

Their origins in the Welsh hills make the Welsh Section C sure footed and tough, attributes which lend this breed to hunting the same country. As a result, many Welsh Section Cs find careers in the hunting field of upland and hill packs. For similar reasons they make great horses for adventurous hackers.

The Welsh Section C is a great jumper, moves well, and is very trainable. These make them great all-round horses who can be very enjoyable Riding Club and Pony Club campaigners.

Despite the cob type, neither the Welsh Section C nor D should have a Roman nose, which the breed standard describes as “most objectionable.” The eyes should be bold, prominent, and set widely apart, and the necks of stallions may be cresty.

The strong, muscular body of the Welsh Section C is reflected in a free, true, and forcible action, and the breed is expected to be deep through the heart and well-ribbed up.

In the past the Welsh Section C has been somewhat overlooked. The Section A and Section B had clearly defined roles as children’s ponies, and the Section D drew all the attention of cob fans with its massive movement and army of passionate advocates.

Today the equestrian community is coming to realise the value of this extremely versatile and useful breed. While small adults can ride Section As and Section Bs, the Welsh Section C is big enough to carry a wider range of riders, while also being small and quiet enough for teenagers and tall children. With this they are tremendous fun, and able to hold their own across the spectrum of equestrian disciplines.