What is a double bridle? 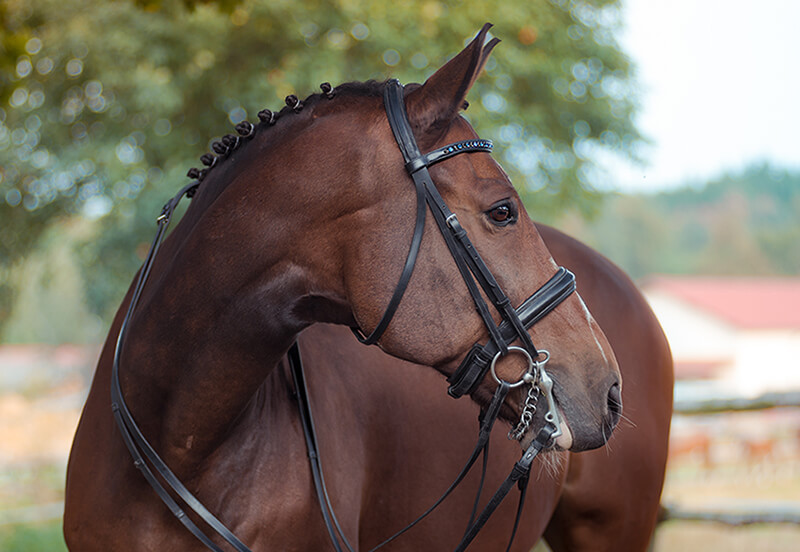 With so many options for bits and bridles, it’s easy to forget that riders haven’t always had the choice. All of the tack that we used came from somewhere, and have had different uses and applications as they have evolved to their modern form.

Double bridles can be an essential tool for riders; often seen on warmblood horses competing at dressage or on horses in the show ring. But, for those who haven’t used a double bridle, they are often a source of confusion and fascination. In this article we’ll look at what a double bridle is, how it is used, where it came from, and when you would be expected to use one.

What is a double bridle?

A double bridle is defined by having two bits – a snaffle (referred to in this context as a bridoon or bradoon) and a curb – each of which has a rein. There are different types of double bridle with varieties of curb, length of shank (the cheekpiece of the curb) and shape in the mouth. Most double bridles are ridden with a curb chain. The curb chain should lie flat in the chin groove, and a padded chain cover used for extra comfort.

This means that riders have a choice when selecting a double bridle, and can make a decision based on what best suits their horse.

How does a double bridle work?

The bradoon works to elevate and bend the horse, and works like a normal snaffle bit, although in a double bridle it is normally smaller than one used on its own. The curb applies pressure to the tongue, the chin groove, and the neck of the horse. By taking up the curb rein the rider causes the levers (shanks) to pull the cheek pieces forward and as a result the head piece applies pressure on the poll.

The pressure in the mouth applied by the curb asks the horse to relax the lower jaw and bend the neck, bringing the head towards the vertical. If the horse has sufficient engagement from the hindquarters using the curb will also lift the base of the neck and withers.

The strength of the curb depends on several elements of the bridle’s design and fit, including; the lengths of the upper and lower parts of the shank, the way that the chain is closed, and the shape of the mouthpiece. Like any bit, the severity of the double bridle is impacted by the hands of the rider using it.

Correct use of a double bridle gives the rider additional control and subtle aids.

How to hold the reins of a double bridle

Experts say that there are at least eight different ways to hold the reins of a double bridle, but before you get too worried only a couple are widely used in modern competition.

Crossing the reins tends to be an easier method to learn, but runs the risk of not utilising the independent applications of both bits, and applying the curb too tightly.

Uncrossed reins, the second method, are achieved by holding the curb under the little finger and the bradoon between the little and ring finger.

The history of double bridles

The bridle itself is an ancient tool, which long predates the saddle. Cave drawings dating back 30,000 years show bridled horses. Early bits were made from horn, bone, wood, sinew, rawhide, and rope, and the earliest metal bits have been found in a part of what was Mesopotamia (modern day Iran) and are believed to date from some point between the Bronze and Iron Ages.

According to Gerhard Politz, a German dressage trainer based in America, bits with high ports and long shanks were present by the Middle Ages, and leather curb straps were attached soon after. These were used on big war horses, and the curb enabled riders to ride one-handed- so that the other could carry a sword or lance. Riding in this context was fairly harsh and done with the purpose of fighting.

By the 18th century there was a move in Europe towards a gentler form of riding with an emphasis on training. In these schemes young horses tended to be ridden in a bit that we would recognise as a snaffle, and move onto a curb bit once they had mastered certain skills. Some illustrations show a second rein attached to the bit, similar to a modern pelham.

The expansion of cavalry regiments led to soldiers needing to train horses as well as ride them, and it is in this development that it is believed the double bridle was introduced. Horses and riders started off in the campagne school, a level of training where the horse was ridden in a snaffle and training focussed on producing an all-round military animal. The term campagne is still used to describe the second set of skills taught to Lipizzaner stallions at the Spanish Riding School in Vienna.

Beyond this level certain horses and riders – mostly officers – were introduced to a double bridle, consisting of a snaffle and a curb bit and two sets of reins. At this stage the finer skills of dressage were taught.

Riding on the curb – an exercise used to show high levels of training, lightness of the mouth, and excellent hands – was seen at this level. Riders would hold the reins in one hand, and only engage the bradoon to raise the head or reinforce leg aids. Today this method can be seen at the Spanish Riding School, and elsewhere by military riders.

Through the 19th and 20th century the use of the double bridle spread, as riders saw the benefit of having the two bits to carry out different aids. The double bridle was supposedly an asset to women riding side saddle, as it allowed them to ride sharper horses and remain in control.

Today the double bridle is still seen across disciplines, although the sheer choice of bits means that riders have more options, and can for example use a pelham or a modified snaffle if a simple snaffle isn’t suitable.

When are double bridles used?

Horses may be ready to try a double bridle when they can work in a good contact, are supple in both directions, are engaging their hindquarters, and able to collect. A rider should have quiet hands.

Double bridles are allowed at all levels in British Showjumping, although there are some restrictions on dimension.

For British Dressage double bridles are not allowed in young horse classes or at Intro, Prelim, and Novice, but are mandatory for international FEI tests. Above Advanced level riders are allowed to compete in snaffles, but team selectors may request that a horse is presented in a double bridle.

British Eventing allows double bridles at all levels for the jumping phases, but only at Intermediate Novice and above for the dressage phase. Like British Dressage and British Showjumping, there are specific rules about the type of double bridle permitted.

Showing has many different governing bodies with varying sets of rules, but generally horses competing in Open classes are expected to be ridden in a pelham or double bridle. The British Show Horse Association, which puts on classes for hacks, cobs, maxi cobs, riding horses, and working show horses, states in its rules that snaffles are acceptable for Novice classes. The Side Saddle Association stipulates that a pelham or double bridle is mandatory for anyone competing in a silk hat with the corresponding turnout.

Should I use a double bridle?

Using a double bridle outside of the specific rules of competition is a personal choice, and one that should be made with the input of your riding instructor or trainer who can give you honest feedback. It should be done in the best interests of your horse, and only when both halves of the partnership have set in place the training foundations necessary to safely and effectively use the double bridle.