What is a Friesian horse? 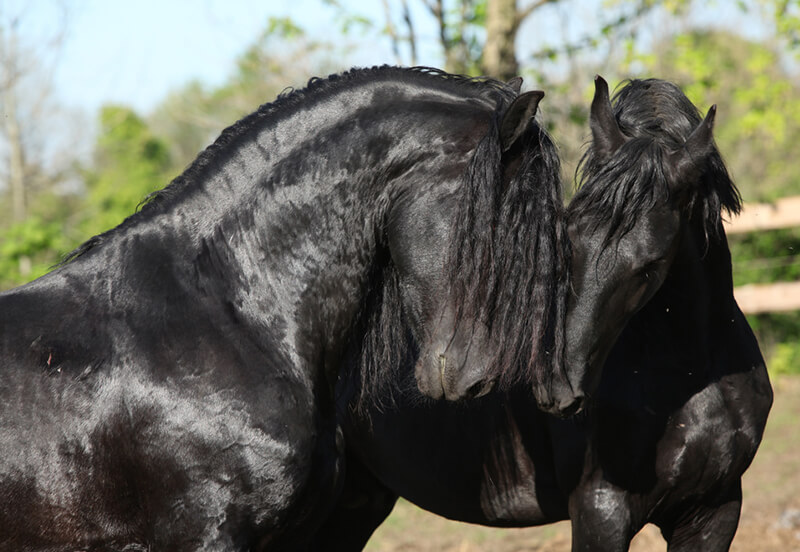 If you’re reading this in the UK, your picture of the word “Friesian” is more likely to be a black and white cow than a horse – or at least it would have been until earlier this week, when Kim Kardashian brought the “Friesian” to global attention.

History of the Friesian Horse

The Friesian is regarded as the only truly indigenous breed of the Netherlands, where it has a long and somewhat troubled history. Around 150 AD, the first records of the breed were made by Roman historians, who witnessed mounted Friesian troops at Hadrian’s Wall. By the seventeenth century they could be found alongside Spanish breeds at classical riding academies. They were in demand as carriage horses and for dressage, and their desirability led to them having influence on other breeds across Europe – notably the Shire horse and the Fell pony through the Friesian’s relation to their antecedent, the Old English Black.

During the 18th and 19th centuries the breed became concentrated in the Dutch province of Friesland, where it was mostly used for pleasure purposes such as trotting races. Later, attempts were made to have the breed compete against heavier horses for agricultural work, attempts which were not hugely successful.

In response to this, the first studbook was launched in 1879, with the ambition of saving what was by then a dying breed. The decision was made to focus on a smaller and heavier horse that was suitable for working on farms, but after a brief resurgence its popularity waned, and by 1913 there were just three aged stallions in the studbook. The workhorse type kept the breed alive until the 1960s, when widespread mechanisation meant that they had no use on farms.

Fortunately for the Friesian, the economic growth of the 1960s drove an interest in riding for pleasure, which gave the horses a new role when their epoch in agriculture ended. The breed’s looks and temperament made them ideally suited to leisure riders, and they quickly established themselves for driving and dressage, as stunt animals, and family horses.

Today the Dutch studbook recognises over 12,000 animals across its affiliated breed societies, half of which are outside of the Netherlands. As well as promoting the breed, and managing its evaluations and standards, the studbook invests time and money to research health issues which are known to affect Friesians.

What is a Friesian Horse?

If you’ve watched The Legend of Zorro (and quite possibly any other film with a majestic black horse) then you will know what Friesians look like. Generally between 14.3hh and 17.1hh, the breed’s most arresting characteristic is its colour. Friesians must be black, and are allowed a small amount of white on their heads. Any star greater than 3.2cm, or sitting below the eye line, will demote an animal from the breed register. Some owners will use UV protective rugs in the summer, to prevent the pure black coat being bleached in the sun.

The Friesian has a noble head with small ears, turning slightly inwards, a luxuriously flowing mane and tail, a proud bearing, and an abundance of feather. The breed description notes that the head has a slight dish, the eye is large and clear, and the horse is built on the uphill. The ideal height is 160cm (15.3hh), and the horse moves with a high knee and a long, balanced action. Friesians are hardy, and can usually live out all year round provided that they have adequate shelter and are given supplementary feeding.

Friesians in the UK are registered and managed by the Friesian Horse Association of Great Britain and Ireland, which acts as a representative of the Royal Society of the Friesian Horse Studbook, (known by its Dutch initials KFPS). The KFPS assesses Friesians and awards them rankings known as predicates, which are based on grading scores, premiums, sports aptitude, performance, and the talents of their progeny.

This predicate can be awarded to fillies, colts, and geldings, and is given at three-year-old inspections. Horses must meet minimum requirements for conformation, movement, and height (156cm for fillies, 158cm for colts and geldings) and all fillies undergo DNA testing for hydrocephaly dwarfism and the chestnut factor.

Awarded to fillies and mares of three years and older. In the UK she must achieve a first premium at the annual inspection and stand at least 158cm tall for provisional Crown status.

Definite status comes after completing an AFBP or IBOP test. The AFBP test is held in the Netherlands and establishes aptitude to dressage, harness work, and show driving. Horses are also assessed on their willingness to work and stable manners over a 33- day period. The IBOP can be taken in the UK, but horses must be four years old. It is more specific than the AFBP as the horses are assessed in just one of the three disciplines.

Horses must score 77 points in either test, with an average of 7 for the walk and trot. Alternatively, mares awarded the Sport predicate can claim Crown status without taking either test.

For mares aged seven years or older, this predicate has similar criteria to the Crown predicate, although the mare must be at least 160cm tall, and to have a foal at foot or to have previously bred a foal.

A performance based predicate open to mares, geldings, and stallions who excel in competitions. It is awarded based on results achieved at shows registered with the KPFS, covering dressage, show driving, dressage in harness, and combined driving. Outside of the Netherlands competitions are eligible pending evaluation by the KPFS Sports Committee and Inspection Jury. Mares who produce three Sport predicated progeny are awarded the Performance Dam predicate.

Mares are awarded Preferent status by producing four predicated sons and daughters. Each predicated animal earns points for their sire, and stallions with over 1000 points are given Preferent status. The award also takes into account the stallion’s temperament, his overall contribution to breed standards, and the proportion of his progeny with white markings.

What are Friesian Horses Good at?

The Friesian’s arresting looks make it a natural choice for stunt work, but away from showbiz the breed primarily finds itself competing in dressage and driving, battling away in the show ring, or as a much – loved family horse.

There are a few Friesians competing in eventing and showjumping, and the Friesian Horse Association of Great Britain and Ireland mention that they can also enjoy Le Trec. The Association runs a dressage league for its members, split into British Dressage and unaffiliated categories.

In Victorian times there were over 700 Friesians in London alone, working in the funeral industry. They were brought over by barge from Friesland via Antwerp, in groups of up to a 100, and sold in auctions to funeral homes across the UK. While their numbers have decreased, Friesians are still a coveted choice for this role. Also in London, Friesians were kept by Harrods and used to drive deliveries to local hotels and palaces when the shop was owned by Mohamed Al- Fayed.

Friesians are a gentle breed with kind temperaments who thrive on human company. This makes them ideal all- round family horses, and they love hacking, beach rides, and taking part in all sorts of local competitions and activities.

Where Can You Buy a Friesian Horse?

Buying a Friesian horse is not very easy, as there are only a handful of breeders in the UK who produce horses that meet the standards of the KFPS. As there are no licensed stallions standing at stud, all British breeders rely on imported semen, or on sending their mares to Dutch studs. Foals born to non-approved stallions can only be registered following DNA testing, and then in an auxiliary studbook rather than the main register.

The Association has a classified section on their website, which lists horses for sale, and they can put you in touch with dealers who source horses from the Netherlands. After the travel restrictions of 2020, you might be keen for a trip, in which case a visit to the Netherlands might be on for some horse shopping.

When browsing horses for sale in the UK, the easy to use search and swipe functions of the Whickr app make it the perfect place to find your “fairytale horse.”