What is a Purebred Spanish Horse (PRE)? 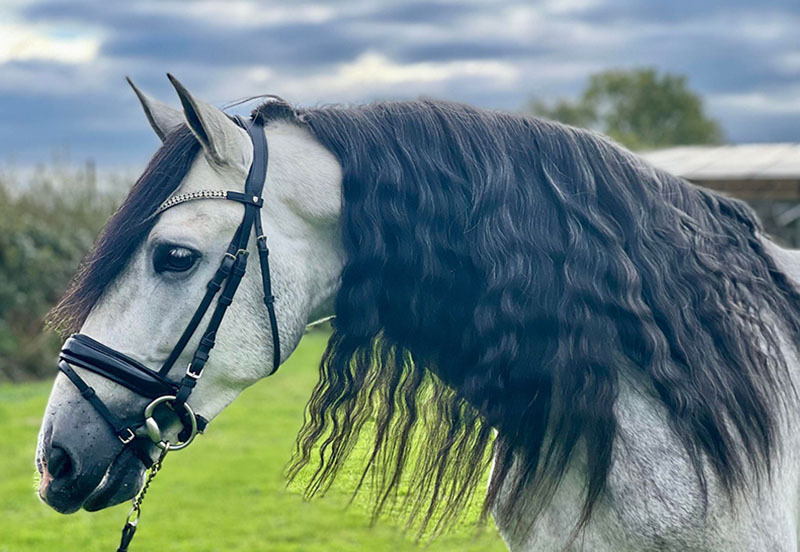 What is a Purebred Spanish Horse?

A talented sports horse, the Purebred Spanish Horse is an athletic animal who has been a key mount of war, influenced the classical riding academies, and is now making its mark in dressage and other disciplines.

What about the Lusitano?

Andalusian horses in general are related to the Lusitano, which is a purebred Portuguese breed also known as the Pure Blood Lusitano or PSL (Puro Sangue Lusitano). The Andalusian, Lusitano, and Purebred Spanish Horse, plus their part breds, are sometimes lumped together into the broader category of Iberian horses.

History of the Purebred Spanish Horse

Although the loss of the land bridge splintered that group of horses into the two breeds, the Purebred Spanish Horse and the modern day Barb share many characteristics. They are both strong and agile, hardy enough to survive in harsh and varied conditions, and described as courageous and intelligent.

The Romans drew heavily on the breed for their war horses, with over a third of their remounts believed to have been bred in Hispania. Purebred Spanish Horses were also the ride of choice for royalty, and paintings depict rulers such as Charles I and Queen Isabel de Borbon riding these horses.

Through the 18th century there was demand across Europe for Purebred Spanish Horses to establish and upgrade local breeds- including the thoroughbred foundation mares.

Like many other European breeds, conflict has played a pivotal role in the history of the Purebred Spanish Horse. Wars across Spain in the 19th century decreased the number of stud farms, which in turn reduced the population.

The industrial revolution changed the role of horses in society, with emphasis shifting away from agriculture and the military to racing and hunting. Neither of these disciplines were a natural fit for the Purebred Spanish Horse, and so by 1925 they were represented by just 15% of public stud stallions.

The two World Wars further decreased numbers, and the Spanish Civil War resulted in an embargo on the exportation of horses. This lasted until 1963.

By the late 1960s horses were again imported into the UK, initially for film work. The first UK studfarm was established in 1978 with the import of two mares and a stallion to Norwich. By 1983 the British Association for the Purebred Spanish Horse (then the British Andalusian Horse Society) was established and affiliated to the Purebred Spanish Horse Mother Studbook in Spain.

In order to improve the breed, a Purebred Spanish Horse Breed Improvement Programme is managed in the UK and in Spain. This consists of several different grading systems for mares and stallions, which seek to recognise the best of the breed.

Some of these are available in the UK- with assessments carried out by delegates from Spain- and others are only available within Spain. Depending on the level the gradings can include conformational assessment, ridden evaluation, x-rays, reproductive tests, and awards based on the performance of progeny.

One of the Spanish based assessments is a dressage series, and all evaluations use the data gathered to generate a genetic index, which demonstrates the horse’s conformational aptitude for dressage, and the heritability of these traits.

What disciplines do Purebred Spanish Horses take part in?

Purebred Spanish Horses and their partbreds compete across a wide variety of disciplines, although their involvement at an elite level tends to be in dressage. Spanish rider Jose Daniel Martin Dockx competed in the 2012 and 2016 Olympic Games on his Purebred Spanish Horse Malagueno. British Dressage, alongside GB PRE, run a championship event for the breed, and GB PRE also put on a national breed championship show and performance points awards.

The breed society is proud of the diversity of sports that the horses can take part in, and there are partbred horses competing in endurance and in team chasing. With their size and temperament they can be great all-rounders and are good doers.

The Purebred Spanish Horse is a medium sized, short backed horse with mares standing between 15hh and 16.3hh and stallions between 15.1hh and 17hh. The neck is high set and arched, and the horse carries itself proudly.

Most Purebred Spanish Horses will be grey or bay, and both white patches and excessive white on the leg and face will bar a horse from the breed register.

The breed standard sets out a specific body proportionality index; a number calculated by dividing the height at the withers by the shoulder-isquial length. For the Purebred Spanish Horse this should be between 90 and 110.

The Purebred Spanish Horse should have their weight balanced towards the hindquarters, which allows them to perform with a high degree of collection, mobility, reactivity, and jumping ability.

Temperamentally the Purebred Spanish Horse is calm, sensitive, intelligent, and quick to learn. They form strong bonds with their human keepers, and are hardy and healthy. Being good doers, they also tend to be economical to keep.

Where can you buy a Purebred Spanish Horse?

The British Association for the Purebred Spanish Horse has a for sales section on their website, which can be easily searched by sex and age, and also features the part bred breeds that are also governed by the association. All of the horses listed are registered with the association, which makes it a safe place to start searching.

Importing a horse from Spain can be an exciting option for those prepared to travel, potentially overcome a language barrier, and pay to travel the horse a long distance. This is an option only for those who are confident with that challenge, but can be an excellent opportunity to buy a horse from source and will give potential buyers a greater choice of horse.

While they are not a common breed in the UK, the Purebred Spanish Horse is an exciting prospect and has the support of proud and passionate owners and breeders. With a long and interesting history, a strict grading system, and conformation designed for dressage, this breed has potential to excel in the right hands.