What is a Suffolk Punch? 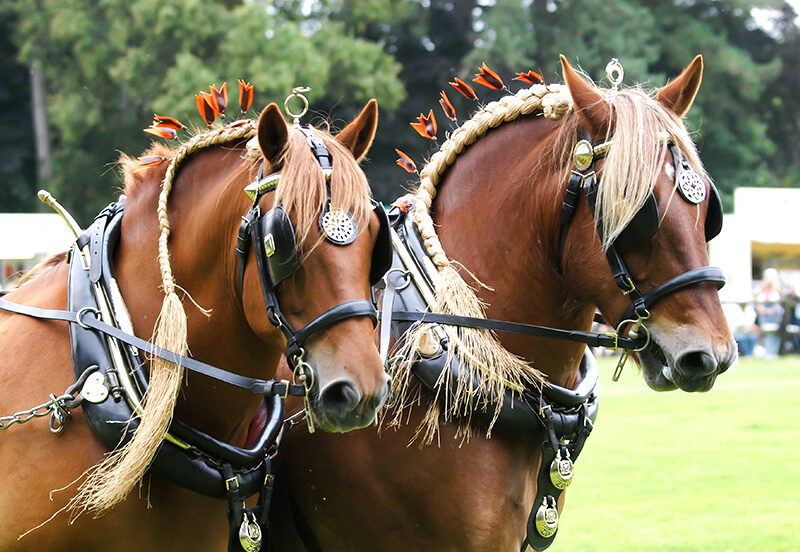 The Suffolk Punch – sometimes called the Suffolk Horse – is one of Britain’s native heavy horses. The mechanisation of farming has heavily contributed to their decline, but people are increasingly aware of the role that this breed plays in rural history.

With its unique colour, contribution to agricultural and military success, and fascinating heritage, the Suffolk Punch has attracted a network of supporters determined to continue its long history. Through these endeavours the modern role of the Suffolk Punch is evolving, and enthusiasts are determined to secure their future as an integral part of the equine landscape.

What is a Suffolk Punch?

A Suffolk Punch is a British heavy horse, bred for agricultural work in East Anglia. The Suffolk Punch has a unique chestnut colouring and is one of the rarest breeds of horse. These powerful and awe inspiring animals are the focus of cutting edge research to preserve and expand the breed.

The Suffolk Punch is the oldest English breed of working horse, and one of the rarest native breeds. The Rare Breeds Survival Trust has put it on their Category 1 Watch List, and there are fewer Suffolk Punches in the world than Giant Pandas.

Bred to work the clay soils of East Anglia, the Suffolk Punch is a heavy horse, adapted for forestry and agricultural work. The Suffolk Horse Society – the association that manages the breed in the UK, Australia, and New Zealand – states that it should stand between 15.3hh and 17hh.

One of the defining features of the Suffolk Punch is its colour. Suffolk Punches are always chesnut – not chestnut – and this was historically split into seven shades; dark liver, dull dark, light mealy, red, golden, lemon, and bright. Today they are classed as one of liver, dark, red, light, or bright chestnut.

Some white is allowed on the head- which is described as big and broad but elegant, shapely, and well proportioned – and mares and geldings can have white up to the fetlock. This is however considered a fault and is not permitted in breeding stallions.

The Suffolk Punch is strong, and “broad” features heavily in the breed description. The eyes are full, bright, and intelligent, and the horse’s legs should be short but in proportion.

Most competitions for Suffolk Punches are held at walk or trot; the former should be smart and true with a quick springing action and the hocks kept fairly close together. The trot must be well balanced and level with a good, straight action.

A history of the Suffolk Punch

The first reference to the Suffolk Punch is believed to have been made in William Camden’s 1586 book Britannica, which describes a heavy horse that sounds very much like the modern animal.

All Suffolk Punches trace back to the stallion Crisp’s Horse of Ufford, who was foaled in 1768. Although there is little information about the origins of the breed, it is believed that they were derived from native breeds like the Norfolk Cob and Norfolk Trotter, European draft horses, and even some thoroughbred blood.

“Punch” is an Old English term which refers to a stout and solid build.

The Suffolk Horse Society was founded in 1877, and manages the breed in the UK, as well as maintaining the pedigree information for Suffolk Punches in Australia and New Zealand. They publish the annual stud book, register horses, and provide a list of stallions at stud.

What were Suffolk Punches used for?

Suffolk Punches were used in agriculture and logging, where their physical strength was put to use in pulling ploughs, dragging logs, and carrying out work that couldn’t be done by humans alone. The Rare Breeds Survival Trust state that Suffolk Punches were capable of working for long periods of time without rest, which also made them relatively cheap to keep.

The importance of heavy horses in pre-industrialised Britain cannot be underestimated. At the start of the 20th century there were 2.6 million of them working across the country. The grandfather of one of the Whickr team remembers heavy horses working on his family dairy farm in the 1930s.

During the First World War Suffolk Punches were taken to the Front to work in the artillery, and others were killed for their meat.

Eight million horses died in the First World War, and Suffolk Punches were amongst this number.

The combination of a loss of use and the impact of the war crashed Suffolk Punch numbers, and they remain at risk of extinction.

Suffolk Punches have made their way around the world

As well as the populations in Australia and New Zealand they were shipped to America in the 1970s in a bid to increase their popularity. Interestingly, Suffolk Punches were also exported to Pakistan to improve their native breeds. They ended up being crossed with donkeys to produce the Pakistani mule.

How many Suffolk Punch horses are left?

Today there are fewer than 10,000 heavy horses in the UK, and fewer than 500 registered Suffolk Punches. The Suffolk Horse Society list 22 available stallions for 2021, and there are few enough foals born each year for every one to be announced on the Society’s website.

While the outlook for Suffolk Punches may seem pessimistic, breeders are taking every opportunity to promote and grow the breed. Surrogacy has been used to implant embryos in mares of other breeds (so that one Suffolk Punch mare can have several offspring in one year), and sexed semen has been successfully used to breed more filly foals.

The Suffolk Horse Society offers cash grants for every stallion listed at stud, every covering by a stallion, mare coverings, and for foals born. They also offer grants for owners to display their horses at events, and have won Lottery funding to promote the Suffolk Punch to local groups as part of their heritage.

What disciplines are suitable for Suffolk Punch horses?

The Suffolk Punch may have lost out to tractors when it comes to farm work, but there is a growing interest in the role that they can play in agriculture. As well as arguably being more sustainable than a machine, they can also work on slopes that are inaccessible for trucks and tractors.

There are showing classes for Suffolk Punches and heavy horses, and owners are encouraged to get them in front of the wider public. They also appear in parades, and are on display at specialist centres.

Suffolk Punches can be ridden, and there are opportunities to show them under saddle. The Suffolk Horse Society state that there are instances of them even competing in agility and gymkhana.

Most of the great warmblood breeds of Europe have some influence of cold blooded horses, and following this fashion Suffolk Punches have crossed with lighter animals to produce a heavy sports horse.

Key characteristics of the Suffolk Punch

The Suffolk Punch is one of the rarest British native breeds, as well as being the oldest native heavy horse. Its most distinctive and memorable feature is its uniquely spelt and monochrome colouring.

The overarching description of the Suffolk Punch is “broad”- this is a strong and stocky horse designed for hard work, but still elegant and well proportioned. They are powerful and impressive, and a great spectacle when paraded or displaying their skills in agriculture and forestry.

In terms of temperament the Suffolk Punch is docile and kind, but also intelligent. Their work history favours an animal that is biddable, but also has a brain to keep itself and its handler safe.

The Suffolk Punch is a huge part of Britain’s pre-industrial heritage, and increasingly people are seeing the value of preserving a breed that not only kept the country in food and wood, but also made such a sacrifice in war.

There are several organisations making a concerted effort to expand the breed’s gene pool and increase the number of horses registered in the UK. Anyone who is interested can visit open centres and attend shows where Suffolk Punches are present and the Suffolk Horse Society produces educational resources tied in to the curriculum, so future generations can learn about and appreciate these amazing animals.

With the efforts and admiration of their dedicated supporters, we may hope for more opportunities to see Suffolk Punches in the future.