What is a warmblood horse and where to find one 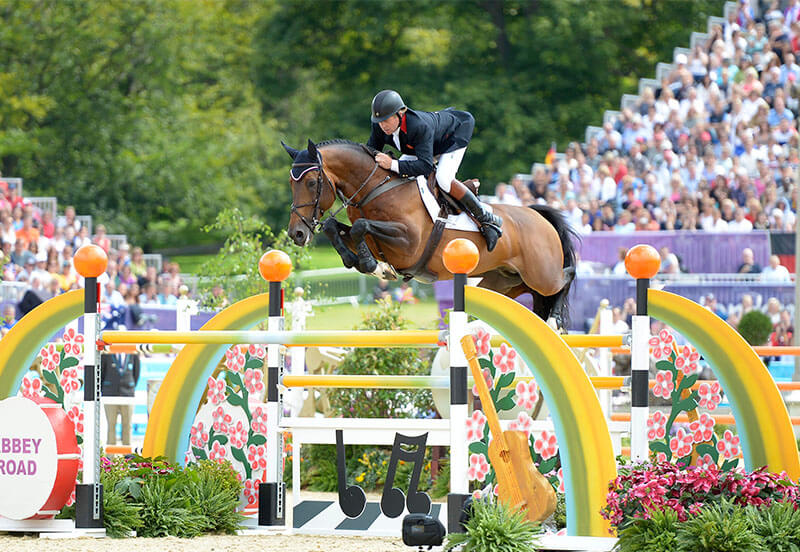 When we think of horse breeds, we generally consider the term in the British sense; Weatherby’s General Stud Book, closed to outsiders, and heavy with the weight of history, or the detailed breed description and requirements of our native breeds, like Welsh Cobs and Ponies. Perhaps that is why warmbloods, with their emphasis on performance over paternity, and their liberal acceptance of any animal they think will help the studbook, can be a source of confusion for many horse owners.

What is a warmblood?

A warmblood is a term that covers any [horses for sale](https://www.whickr.com/) that are not a coldblood (the draught breeds) or a hotblood (a thoroughbred or an Arab). However, it is generally applied to a range of European horses, perhaps the best known being the Dutch warmblood (KWPN), the Oldenburg, and the Hanoverian. Warmblood breeds typically originate from the need to have horses that could be used as military mounts, and work on farms. As war and agriculture became increasingly mechanised their role changed to sport. Some of the breeds owe large parts of their development to state studs and sponsorship, while others were developed through private breeders and clubs.

What they almost all have in common is a strict procedure of grading and performance testing, meaning that only the best mares and stallions are kept at stud, and the best geldings sold with the society’s brand.

On the continent these systems are highly regulated and have a long history, which is part of the reason why these European nations have been able to dominate dressage and showjumping throughout the 20th century. In contrast, the British Warmblood Society, now known as the Warmblood Breeders’ Studbook UK, was founded in 1977.

Known in the Netherlands as the Royal Dutch Sports Horse, the KWPN descends from farm workhorses. The early studbooks concentrated on breeding horses that were suited to the agricultural sector and soil type of each province, and these stratifications are the origin of the KWPN’s four modern “directions”: jumpers, dressage horses, harness horses, and Gelder horses (usually referred to as Gelderlanders in the UK).

Each direction has its own breeding goal and council, and the horses must meet their requirements on bloodline, conformation, and ability.

The Gelder is the oldest of the directions, and is the common ancestor of the other three. Originating in the Gelderland province, these animals were crossed with thoroughbred, Hackney, and Yorkshire Coach Horse blood to produce a carriage type horse. The Gelder is suited to work under saddle and in harness.

In the Netherlands there are annual Stallion Selections, where horses are subject to two viewings and an array of tests and inspections covering traits, conformation, lineage, health, performance, talent, temperament, veterinary requirements, and semen quality checks.

Stallions entered in jumping and dressage directions also have to have a Genomic Breeding Value. Already a popular breeding tool for cattle and sheep in the UK, GBVs are a prediction of the animal’s performance based on genetic markers, and the recorded performance of related animals. The Stallion Selection takes particular interest in the horse’s GBV for the orthopaedic disease osteochondrosis.

Stallions outside of the KWPN studbook may be given recognised status without attending a Selection, provided they have a record of excellence in showjumping or dressage. As the KWPN’s emphasis is on performance rather than strict paper requirements, there is no overarching breed description. However, mares must be at least 15.2hh, and stallions 15.3hh. Notable Dutch warmbloods include Big Star, Valegro, Totilas, and Negro.

The Oldenburg originates in Lower Saxony, Germany. The breed started from mares suitable for farm and carriage work, and stallion inspections begun in 1755. By 1820 they were mandatory under state regulation. Unlike many other continental warmbloods, the Oldenburg has never had a state-owned stud farm. The Oldenburg breed has the slogan quality is the only standard that counts, and this is clearly seen in the breed society’s approach to the introduction of new blood. Mechanisation drove the change towards producing riding horses, and in the mid 20th century many thoroughbred stallions were approved. Since then Hanoverians, Holsteiners, Westphalians, Trakheners, KWPNs, and Selle Francais have all been used to refine the breed. Oldenburgs are branded with the society’s logo, and ideally stand between 16hh and 17.2hh. They are expected to have expressive, elastic gaits with a great deal of suspension, and stallions and elite mares are scored on temperament, character, constitution, and willingness to work as well as physical performance.

Oldenburg colts are named patrilineally (their name must start with the same letter as their sire’s) and fillies are named matrilineally. This means that the female line is not lost as the fillies keep their dam’s initial, rather than also being named after the stallion.

In 1976 the Oldenburg Volturno was part of the silver medal winning German Olympic eventing team. Since then the breed has been best known for dressage and showjumping, with notable horses including the legendary Donnerhall, Sandro Hit, Sandro Boy, and Arko III.

The Hanoverian is one of the most widespread of warmbloods, with 19,000 active broodmares and 450 approved stallions. Although stallion performance tests can only be taken in Germany, Hanoverians bred elsewhere are eligible for registration, and the studbook accepts non- Hanoverian mares subject to assessment. The breed originated in the 18th century, with the establishment of the Landgestuet, a state operated stable of stallions, in 1735. The original objective was to offer good stallions at low fees for the production of war horses; it now offers the same service for a different end use. 130 stallions owned by the stud shuttle between breeding stations in the area through the covering season, and state owned stallions are responsible for a large proportion of services registered with the Verband.

The Verband hannoverscher Warmblutzuchter was established in 1922 by the amalgamation of 54 local breeding clubs, and it took over the Hanoverian Warmblood Studbook. The original aim was to produce a large, robust carriage horse that was suitable for war and farming. Between 1815 and 1870 there was a strong British influence with the use of thoroughbreds, followed by a period of genetic consolidation. The focus switched to producing riding horses with the mechanisation of agriculture, and the Verband now looks to breed a performance and pleasure horse with an emphasis on dressage, eventing, showjumping, and driving.

The Hanoverian grading system is one of the most rigorous of any breed society. Starting as foals, mares are subject to assessments until the age of seven, and stallions to four. Progeny results are then collated and analysed to produce a Best Linear Unbiased Predictor (BLUP) index for each breeding horse, which helps breeders produce stock from only the best mares and stallions. BLUP is a statistical tool which estimates the potential performance of a horse based on its relations.

The success of the Verband’s thorough evaluations and performance testing is evident in the prowess of the breed. Olympic dressage gold medallists Salinero and Gigolo were both Hanoverians, and the famous Oldenburg Donnerhall was by a Hanoverian stallion. Other Hanoverians include the top stallion Weltmeyer, and the showjumpers Shutterfly, For Pleasure, and Dollar Girl.

While the pure Hanoverian is yet to make a significant impact on eventing, the team gold medallists Butts Abraxxas and Butts Leon were both out of Hanoverian cross thoroughbred mares and by thoroughbred stallions.

Where can you buy a warmblood?

Traditionally, British riders only got their hands on warmbloods through the import of young horses. They were expensive, and only really an option for those with ambitions to compete at the highest tier of the single phase disciplines. Warmbloods often also have a reputation for a lack of common sense – a bit like the straight A* student who can’t tie their shoelaces - which can put off the amateur rider.

The establishment of the British Warmblood Society, as well as UK branches of continental studbooks, has made warmbloods more accessible to the British market, while the introduction of short format eventing has led to their popularity increasing across all three Olympic disciplines. However, these continental breeds are often still crossed with thoroughbreds to produce top class eventers.

Buying a KWPN horse in the Netherlands

Dutch warmbloods can be purchased through the KWPN’s online marketplace, Dutch auctions, the KWPN Select Sale, and through their online stallion auction.

Buying an Oldenburg horse in Germany

Vechta in Germany is the home of the Oldenburg, and hosts the autumn Stallion Days, where stallions and gelding prospects are auctioned following their licensing evaluations. Vechta also hosts sales of young horses, elite riding horses, and broodmares throughout the year. Their mixed sales offer a wider variety of horses, with animals perhaps better aligned to an amateur budget.

Buying a Hanoverian horse in Germany

For the ultimate horse buying experience, head to the Verden auctions, where customer advisors will match you with the perfect Hanoverian, and arrange test riding appointments. The glitzy auctions sell off some of the best- and most expensive- Hanoverians in the world. For those keen to avoid crossing the channel, the British Hanoverian Horse Society has a stud database and a for sale selection.

Buying a warmblood horse in the UK

Within the UK there are specialists who import horses to a buyer’s specification, and there are of course warmbloods for sale through sports horse auctions and private websites (both European and British bred). Progeny of warmblood stallions can be found at all levels of horse sales, and can be a less expensive method of buying into a bloodline, without travelling abroad. Our [Whickr app](https://www.whickr.com/) should be your starting point for finding warmblood horses in the UK- be they young horses, seasoned competition animals, imported, or home bred.

Why should you choose a warmblood?

The success of the warmblood speaks for itself, with the horses mentioned in this article alone garlanded with a mine’s worth of Olympic and World Equestrian Games medals. Performance testing and evaluations have made warmbloods almost unbeatable at showjumping and dressage, with even the biggest thoroughbred fans conceding that the days of Chris Bartle’s success with ex racehorse Wiley Trout are long behind us.

Bred for trainability and a natural expressive gait, warmbloods are born with the characteristics to succeed in the single phase disciplines, while their cross bred progeny set hard to match eventing dressage scores and jump careful clear rounds. Coupled with the speed, stamina, and intelligence of the thoroughbred, horses like Butts Abraxxas have the versatility to excel in all three phases of eventing.

For anyone wanting to compete at the highest level of equestrian sport, warmbloods are the obvious choice.