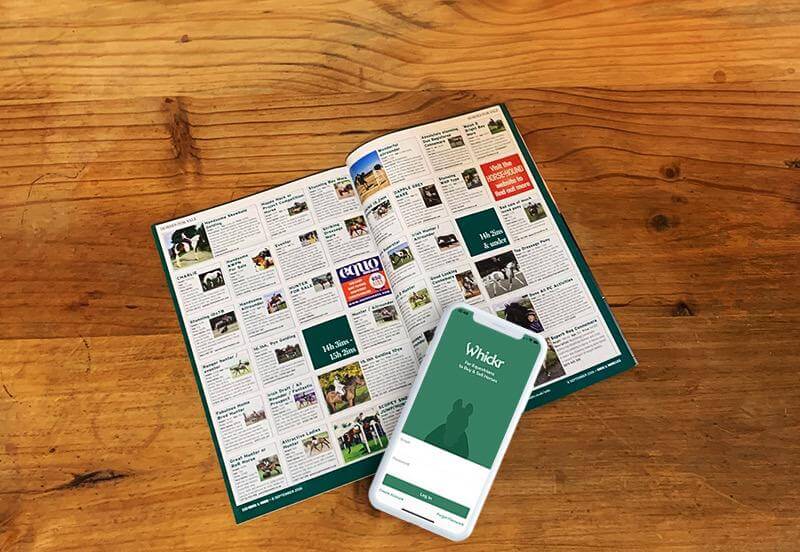 To celebrate the start of a new decade and the dawn of a new digital day for the equestrian world, Whickr is taking a ride down memory lane to see how technology has shaped the habits of equestrians buying and selling horses over the last 20 years. It’s amazing how far we’ve come…

Trotting towards the early ’00s

The internet found its stride in the late ’90s, when new dot-com companies claiming to have solved obscure problems you never knew existed suddenly appeared on the scene.

Following one of the worst stock market crashes in history, many of these early companies aren’t around today but their legacy of propelling the internet into the mainstream remains. It was no longer reserved for the geeks, introverts and academics – the internet had reached everyday people who were keen to surf the World Wide Web.

However, advertising your horse for sale on a website still wasn’t the done thing. The equestrian sector, a community draped in tradition, is typically a laggard when it comes to the adoption of new technology and trends. Although there were a few websites at the time, one of them being a popular go-to site today, most UK equestrians would continue to look to the old faithful, Horse & Hound magazine.

When advertising horses for sale, there were three options: a basic text-only advert, a text advert with a photo, or a premium listing, which landed your advert at the front of the classifieds. To advertise your horse for sale, you would send the information and photos via post to the Horse & Hound.

Once your advert was published in the next edition, you could be found eagerly awaiting your house phone to ring or waving your mobile next to an open window, listening out for the tell-tale sign of an impending text message to your Nokia 3210 – the sound of digital galloping horses! Sending your response back involved mastering the art of txtin shrthnd 2 avoid usin 2 msgs n 2 much cred x.

Buying a horse in the early ’00s

As the go-to place for equestrians advertising horses for sale, buyers of horses would also wait for that infamous weekly magazine to be delivered to their door… or schedule a visit to the local newsagent, where if you were lucky, there might be two copies available for purchase.

I still like to browse the classifieds section each Thursday, it’s a ritual I think I will always enjoy!

When you discovered a horse you liked, having scanned the tiny adverts, complete with small descriptions and low-res images, (if you were lucky!) the next step was to contact the seller. Typically, this was done with a phone call, something I’m sure some younger readers would baulk at – speaking to someone using my phone – urgh!

After speaking with the seller, if you were still interested and the horse was a long way from where you lived, the next step was to request more information.

The seller would send photos and a video of the horse taped onto a VHS cassette in the post. In most instances, once you and the rest of your family had sat around the TV (which probably comprised more back than actual screen) and watched the shaky film taped over the middle of an episode of Emmerdale, you’d be expected to return the VHS cassette to sender.

Only then would you decide whether or not to go and try the horse. If not, once you’d popped the photos and VHS back in the post, you repeated the process over and over, until you found your next horse. If you were lucky, you’d find one nearby.

Cantering into the mid to late ’00s

Armed with a PC (or laptop if you were up-to-date with the latest trends) and a digital camera, equestrians in the mid to late ’00s embraced the use of horse advertising websites.

Advertising your horse for sale on a website was far easier and more efficient than sending hard copies of everything in the post and waiting days for your advert to be viewed.

Browsing horses for sale in the mid to late ’00s

As long as no-one was using your house phone, equestrians, now armed with dial-up connection, had the luxury of searching website listings at their leisure, with new adverts published on a daily basis.

More informative and high-quality ads were now available with large, hi-res images of your prospective purchase viewable, albeit piece by piece over the course of a week at a download rate of 4kb/s… (You could always just wait until the head came into view and then make the risk assumption that the horse had legs.)

Now, after contacting a seller to request more information, you could receive video within minutes, and the chore of returning the cassette back in the post was no more. A win for ease and convenience due to technology.

Jumping into the early to mid ’10s

For technology enthusiasts, the early to mid ’10s was a thing of beauty. Rapid and competitive development in mobiles created the device that now aids us in doing everything from banking, watching TV, shopping and much more. That technology is of course the smartphone.

By 2015, over 70% of the UK adult population now had a smartphone. Internet usage hit 90%, and a third of that usage was via mobile. The world was hooked on miniature computers that were like digital swiss army knives in your back-pocket. (To think that my iPhone actually has a better camera and more memory than the laptop I’m writing this blog on!)

If someone could have told me 20 years ago that we would have come this far this fast I would have fallen off my horse!

The smartphone would have a significant impact on how people went about buying and selling horses, as people now had the ability to live their lives in the palm of their hand, and browse the net at speed.

The arrival of social media would then introduce another phenomenon that would significantly change the way horses were browsed, bought and sold. Facebook. Created in 2004 as a way for Harvard University students to better connect with each other, Facebook became the go-to place for people advertising horses for sale.

Why advertising your horse for sale on Facebook worked

Firstly, it was free. It also provided an easy way of reaching a large audience of over 2 billion global users. Advertising your horse on Facebook via the app was an easier and more convenient solution than traditional websites at the time, and you could upload videos and photos straight from your phone.

Crucially, using Facebook’s app allowed sellers to interact with potential buyers using in-app messaging, share photos and videos easily on request, and essentially communicate without the need to run off and send an email, text message, or dare I say it, make a phone call.

Another benefit was how easy it was to share adverts with your family, friends or riding instructor. Simply mention and ‘tag’ them in the comments section and you were off to the races. Horse shopping on Facebook was like a revelation.

Facebook did however come with its downsides for both buyers and sellers, which we’ll explore in more detail in an upcoming blog post. However, the important thing to note is that what changed Facebook significantly towards the end of the last decade was the increasing clamp-down on advertising horses for sale.

It’s uncertain when Facebook began enforcing the ban of selling horses on its platform, but in 2019 the number of horsey Facebook groups and pages that were either shut down or restricted spiked dramatically.

Many equestrians now find their adverts removed and run the risk of doing time in Facebook jail, with their personal accounts suspended.

A new decade, a new ‘app’ ortunity: Galloping into the ’20s

Consumers and businesses are now immersed in technology, and there is an app for almost everything. Since Apple’s first iteration of the App Store in 2008, the number of apps available to download has grown from 500 to over 2 million on both the App Store and Google Play.

Although equestrians are typically a little later to the party (I would argue fashionably), when it comes to the adoption of new technology, it’s difficult to argue with the statistics that suggest apps are the dominant tool and way of consuming content nowadays.

Our horse-selling app, Whickr, is designed to include all the benefits from every method of buying and selling horses that has come before it, while also providing the equestrian world with its own digital community at the swipe of a finger. Other apps like this will inevitably join the party… destined to grow in success, popularity and number.

Benefits of advertising your horse for sale on the Whickr app

Benefits of finding your next horse using the Whickr app

We have a blog that covers the journey of Whickr, and the benefits of using a horse selling app in more detail.

Over the last 20 years technology has moved on more than ever before, and I think it’s fair to say that it’s made all our lives a little easier when it comes to buying and selling horses.

If you have an interesting, funny or even cautionary tale of buying or selling your horse pre-internet, we’d love to hear it. Please email tackroom@whickr.com and we’ll share your story in one of our blogs. Feel free to share your pictures too!